10% DISCOUNT on FENCES until December 1!

We accept orders for summer and autumn 2020!

Today I had a day, quite calm and measured. I wondered how I chose the forge as my life’s work. Since childhood, I clearly did not dream of becoming a blacksmith, did not strive to become a welder or follow the path of hard physical labor. I was more attracted to the humanities: economics, law and administration. Perhaps that is why I considered it necessary for myself to get an economic education and did not even think about technical disciplines related to construction and metal structures, much less about professions related to art. But, it was this direction that became my main choice on the path of life. The first time I visited the smithy as a child, in the early nineties, and practically did not remember this visit until 2007, when I was already in another workshop to discuss an order for the improvement of a section of a house under construction. This was one of the moments that determined my future. 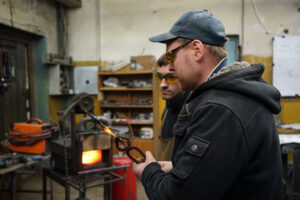 Blacksmithing is one of the most archaic and most significant in the history of human society. Blacksmiths largely predetermined the development of the most successful civilizations. Great empires grew, expanding their territories thanks to the power of weapons created from metal by master armourers, providing their economy and people’s lives thanks to metal agricultural tools and means of production, produced by forging and casting ferrous and non-ferrous metals. Now, most types of products previously made by hand are mass-produced on the conveyors of factories and plants.

Blacksmiths in our time do not make plows, shovels and hoes in competition with large industries, do not forge swords and spearheads and arrows for use in combat. Today, these are masters who create unique pieces of architectural decor, beautiful gates and fences, railings for stairs and balconies, furniture and interior items, preserving the traditions and knowledge of predecessors from other historical periods.

It is difficult for me to describe how glad I am that I am the continuation of these traditions. The classic blacksmith’s workshop, enhanced by modern means of information and communication, machine tools and power tools, makes it possible to carry out works of the level of masters of the 19th and early 20th centuries faster, more clearly, and more diverse than a century or two ago. So, for example, we made fences, which at that time could only be afforded by royalty and those close to them to clients who come to us through advertising on the Internet. 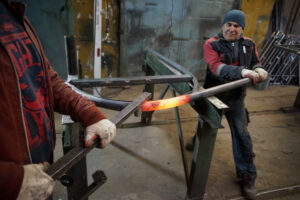 But, back to where I started my story. I have defined for myself a number of professional goals, which are determined by irrepressible creative ambitions. First of all, I want to work in various styles and directions, ranging from the palace classics of Baroque, Rococo and Empire style, engaging ethnic motives and eclecticism in its various manifestations, and ending with modern futuristic projects. I do not even exclude for myself the work on the creation of gates, visors and railings in such styles as loft, industrial and steampunk. Well, if there are those who want to order an interior for a house, apartment or restaurant in such a fantastic design as cyberpunk, then we will realize this too.

I have fulfilled some part of my plan. Perhaps we can state that the minimum task has been completed. However, as you know, appetite comes with eating and now I want more. In addition, I am open to cooperation with all craft workshops that share in whole or in part my outlook on life. I invite everyone to communicate and, perhaps, to work on joint projects.